Recently, a friend asked me for some help in taking down the antennas at her father's QTH (W6RXU). He'd become a silent key in 2008, and the house was being fixed up to be sold.

The biggest challenge was taking down a Hy-Gain 18-HT Hy-Tower vertical antenna. It's 53 feet tall, with about 24-feet of triangular aluminum tower and the remainder aluminum tubing. 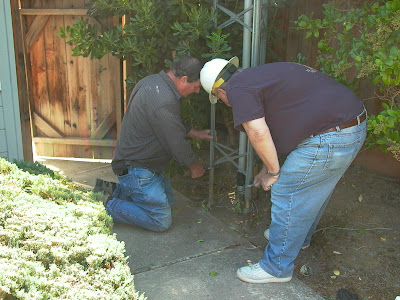 Here is Dan, W7DR, and Barry, K6RM, planning how to approach the problem. As it turned out, this older version of the antenna didn't have a hinged base. Originally, we'd planned to climb the tower and pull the sections off with a gin pole. However, we eventually decided to "hinge over" the tower at the base and allow the legs to deform a bit. This worked out quite well, and it meant that the only climbing we needed to do was to loosen the tubing portion and drop that down inside the triangular tower portion to reduce the height (and leverage required). 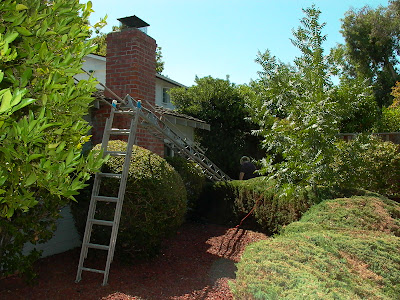 The Hy-Tower after tilting it down.

With the antenna tilted over, we were able to detach the last two bolts in the base and walk it away from the base. The triangular tower portions all disassembled easily. Getting the tubular portions apart required a bit of drilling, but eventually it all came apart and was on its way to a new home in the central valley! 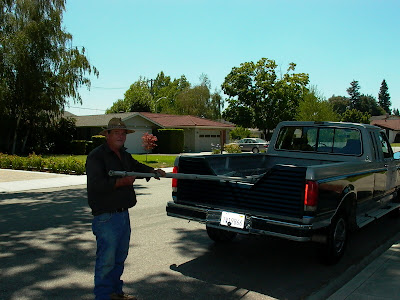 W7DR and his new (old) vertical. 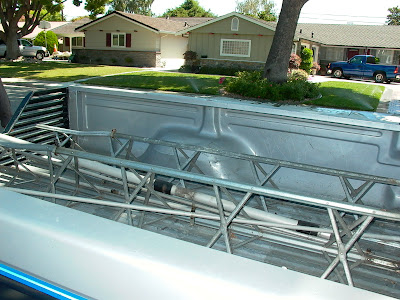 All snug in the truck bed.
Posted by Gordon Good at 7:34 AM