I've been thinking about the most effective antenna I could build for 40 meters. Since I've been pretty satisfied with the performance of my 40M tree-mounted wire vertical, I wondered if there was some way to get another vertical mounted nearby and use the two as a phased array. Then I ran across these two articles:
(Warning: the N4JTE article has an error in the section where he describes how to calculate the resonance point of the phasing lines. Go to the end of the comments where he describes the correct method).

Both of these use a method of feeding the antennas that's described in the ON4UN Low-Band DXing book called the Christman Feed. The article by Bud, VA7ST, was particularly good in that he mentions an addition that allows the user to not only switch the end-fire direction, but also configure it for broadside operation by feeding both antennas in phase. I've worked Bud on 80 meters in a contest, and if he can hear me, the antenna must work well!

After reading these two articles, I decided to do an experiment and build a two-vertical phased array for 10 meters. Why 10 meters? Two reasons: One, I have enough aluminum tubing and mast to build a couple of 10 meter raised verticals with resonant radials, but erecting a 40 meter vertical will require more thought. And two, the ARRL 10 meter contest is this weekend! I seem to be making a habit of building a new antenna before (or during!) every contest I try.

My thinking is that if I can get this to work, any phasing relay box I build can be made to work on a different band - I just need to construct different phasing lines for it. I did have some concerns that on 10M, the tolerances for the phasing line lengths might be tight, but what the heck.

I won't go into all the details here since this is described nicely in the N4JTE article. Using that method, I calculated the expected resonant frequency of the 71 and 84 degree phasing lines (they resonate at a higher frequency than 10m, because they're physically shorter by a factor of 71/90 and 84/90). I calculated the expected length of a 1/4 wavelength coax line, adjusted for the velocity factor, cut it about 10% long, and trimmed until my MFJ-259B antenna analyzer showed resonance (minimum reactance, Xs) at the calculated frequencies. Between getting my formulas upside down and getting confused about whether to multiply or divide by the velocity factor, this took me all of Wednesday evening.

A trip to Fry's in Sunnyvale on the way to work the following morning netted me a couple of 12 VDC 10A DPDT relays, a plastic enclosure, a terminal strip for the 12 relay lines, hookup wire, and some long bolts to use to attach the phasing lines and feedline.

Thursday evening, I put the whole contraption together. It actually turned out pretty well (most things I build have a sort of Homer Simpson look to them): 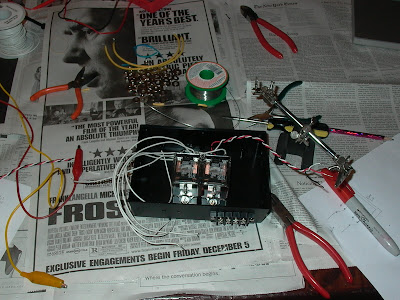 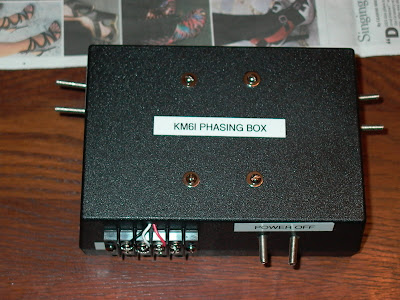 The posts labeled "Power Off" in the bottom of the photo indicate the antenna that leads in phase when no relays are enrgized. The posts to the right are labeled "Power On" and indicate the leading antenna when the end-fire direction relay is energized. The posts on the left are for the feedline from the shack. When the broadside relay (on the right) is energized, both antennas are fed in phase. The 71 degree phasing harness simply connects to each antenna's posts.

By the way, I used the labels "power on" and "power off" because I want it to be easy when I'm installing the thing to make sure the eastward-pointing configuration, which I'll be using the most, is the one the requires no power to be applied to the relays.

The screw terminals on the bottom of the photo are for the relays (common, end-fire relay, broadside relay).

When I build a switch box for the shack, I'll label the switch positions with the true headings for the resulting patterns. Hopefully when I get the 40M array build, those directions will be "east", "west", and "north/south".

To begin with, on Thursday evening I modified my 20M vertical by cutting the radials for 10M and shortening the driven element. Then, I constructed a replica. 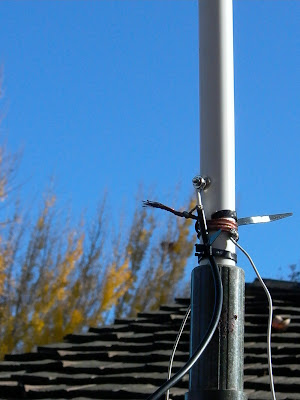 Antenna base, radial attachment, and feedpoint

The PVC coupling section slides snugly into the end of one of the fiberglass stacking poles I've been getting at Mountain View Surplus. These poles are great! Three sections hold the antenna up 12 feet. Yes, the connection of the feedline to the antenna is not very sturdy - it's just a temporary experiment.

Finally, at 1am I decided I'd better stop building antennas and go to sleep. Here's how the antennas looked in the morning. 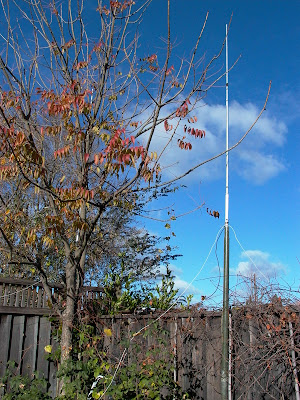 Friday night after the kids were in bed, I attached my MFJ antenna analyzer to each antenna and tweaked the driven element length for resonance at 28.5 MHz. I got a best reading in the shack of Rs=50and Rx=1 at around 28.5 MHz on each antenna. I did not take measurements at the antennas because it was raining, and while I don't care about getting wet, I don't think the MFJ-259B feels the same way.

I was planning to do this right after tuning the antennas, but arrgh, I had gotten so wrapped up in work Friday that I forgot to go to the hardware store and get the correct size nuts for the mounting posts on the phaser box (I managed to buy the wrong size nuts for the bolts I bought).

Well, the 10 meter contest has started, so I'm continuing my tradition of constructing antennas while the contest is going on! However, since (a) it's nighttime, and (b) 10m looks not good for this weekend, there's no big rush. I'll run out to the hardware store tomorrow morning and get the nuts and plug in the relay box.

(Update: I got everything hooked up Saturday morning.)

The results were mixed. During the 10M contest, I could hear better on the G5RVjr, but that may have been due to the difference in height between it (25') and the verticals (12'). On the bright side, I did notice about one S-unit difference when switching the end-fire pattern while listening to stations to the east of me. Although conditions were pretty bad for the contest, I did work a couple of stations in Colorado, and of course a bunch of local NCCC members.

So I'd call this a qualified success. Although the overall performance wasn't very exciting, I've got a relay box and in-the-shack phasing control switch that works, and can be used on a similar antenna built for a lower band.