- I replaced the long audio speaker leads (zip cord) on our home entertainment system and my son's stereo system with some custom-made twisted-pair speaker leads (2 different color wires + 5 minutes with an electric drill = twisted pair). These speaker leads have a 1-inch-long ferrite core around which the pairs are wound: 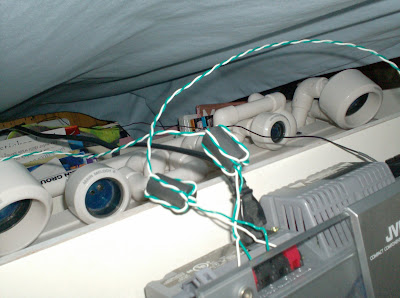 The cores are some things I had in my junkbox, so they're made of unknown material. I think they probably came from Weird Stuff, so who knows what they're made of, but they seem to have helped. Before replacing the speaker leads, transmitted CW on 10 meters was clearly audible in the speakers of both our home entertainment system and the stereo in my son's room. Seems like a success.

- A Bencher low-pass filter just past the transceiver in my station. I had no real reason to suspect any sort of problem with harmonics, but the filter was $85 and that's cheap peace of mind for me.

The next day, I did a survey with the following parameters (values used for this test):

The RFI/TVI problems I have are:
After recording the baseline data in a spreadsheet, I tried the following:
My best guess is that there's some sort of common-mode coupling coming in on the CATV feedline (it runs very close to the G5RVjr's feedline). So I'll try a common-mode choke once I get some ferrite parts big enough. A small snap-on choke didn't help matters.

So, at this point, unless there are some gremlins I haven't found yet, the only problem I'll have is if someone is watching a DVD and I'm transmitting on 40M with the G5RVjr. That's actually fairly unlikely, given that my droopy radial vertical works better on 40M anyway, and it's never caused any TVI I'm aware of.

So I'm pretty close to being able to declare my own house clean, which is a big confidence-builder for going QRV in contests.
Posted by Gordon Good at 8:38 AM

Email ThisBlogThis!Share to TwitterShare to FacebookShare to Pinterest
Labels: TVI