A Different Kind of Antenna Modeling

As I've been planning the improvements to my station, one thing I've wanted to do is to make sure that my planned antennas are something my family can live with, visually. To that end, I wanted to be able to visualize how the antennas might look. Here are some of the results:

This is my planned antenna system, barring any major snafus. It's a TGM Communications MQ-34SR mini-beam for 20/15/10 meters, with a G5RV mounted just below the rotator. 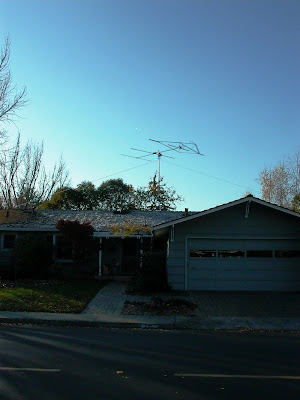 I selected the mini-beam because it's about all I can fit at the rear of the house, where I've only got 11 feet of space to the fenceline. A tower on the side of the house would allow for something bigger, but we may be remodeling or moving, so there's not much point in building something permanent. At best, I would need to abandon it if we move, and at worst I might need to take it down, if we remodel. 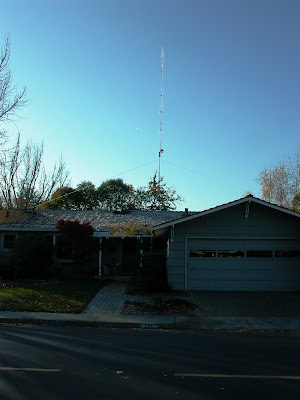 The R8 seemed to be the best choice for a 40-10m, no-radials installation, based on my reading N0AX and K7LXC's HF Vertical Performance - Test Methods and Results publication. If you're thinking about a vertical, I highly recommend ordering this - it was $17 well-spent.

First, I should say that I have very little artistic talent, and anyone who's at all competent with Photoshop probably will roll their eyes at my work. However, it did the trick - it let me visualize how the antennas will look.

Step 1: Get a good photo of the house. Make sure that there's enough sky in the shot to allow your planned antenna to fit. Ideally, take the photo on a clear day.
Step 2; Get some size references. Rather than trying to do all the math to calculate how big, say, a 28-foot high vertical should appear in the photo, I just temporarily set up a 30-foot high mast using the fiberglass stacking poles I mentioned in a previous post. I photographed the house with the mast in place, and used that as a reference.
Step 3: Find a photo of the antenna you're thinking of erecting. A Google search yielded photos of both antennas I was thinking of.
Step 4: Using photo editing software, import the antenna photo and erase all the background around the antenna. I use The Gimp, and am able to zoom and edit out the background.
Step 5: Create a new file, and set up two layers. One layer will have the house photo, the other will have the antenna.
Step 6: Resize the layer containing the antenna so that the apparent size of the antenna is correct. In the case of the R8 photo above, I made the antenna, which is 28 feet high, just slightly less tall than the 30 foot mast, then positioned the base of the vertical at the top of the mast.
Step 7: For a more geometrically complicated antenna like a beam, it's pretty likely that the perspective of the photo you found won't be right for the photo of your house. I used the Gimp's "Skew Perspective" feature to "eyeball" things so the perspective looked right. Again, I'm sure that if I dusted off my old computer graphics book from college, I could have gotten the skew exactly right, but as it is, it does the job.

Also, for sizing photos of beams, I found that it was easier to draw a line of known length, then skew it to the same angle as an element of the beam for which you know the length. For example, the TGM mini-beam has an 10-foot boom. I drew a line that was 1/3 the length of my reference 30-foot mast, then skewed that until it was parallel to the boom of the image of the antenna. I then resized the antenna image until its boom was the same length as the line, and finally deleted the line.
Another idea is to search around the web for real-life photos of the antenna you're thinking of, especially when mounted on a house of similar size to yours. That will help you determine if you've got the perspective and sizing about right. 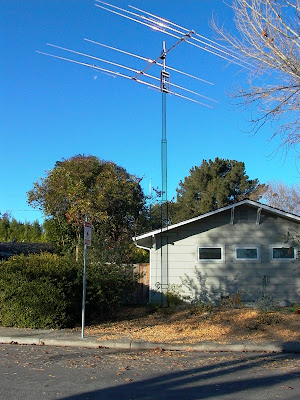