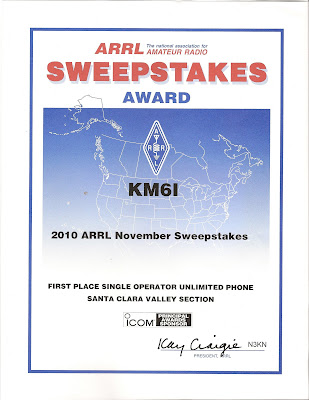 I won this with a relatively modest phone score (1,027 QSOs and a clean sweep for a score of 164,320) compared to the winners in the B category (K1ZM@VY2ZM had a score of 349,022), but I'm very happy with the wallpaper. To be fair, many of the NCCC heavy hitters were doing split-site operations to maximize the club score, and if you add their two station scores together, they are way larger than mine.

I also only made this score because Kevin, AD6Z, shared his station with me. He's SO2R-capable, so we split his station in two and shared antennas (of which he has many, on 3 towers), and he let me use his spare amplifier. And he gave me the best band most of the time.

This year, I'll be doing a solo unlimited-category effort from Kevin's place for the CW weekend, and we'll be sharing the station for phone like last year. I went up to his place this evening to get my K3 and computer plugged in, and was reminded of how great his antenna farm is. It was about 10pm local time and I was tuning across 40 meters when I copied an ES and a YO. I never hear Europe on 40 from my home shack, but at Kevin's place they were 5X9. It's a different world up in the mountains with 40m beams.