How we fixed the W6VMW Green Heron RT-21 rotator controller

At W6VMW, we have a Green Heron RT-21 rotator controller driving the Yaesu G-1000DXA rotator on our tower. The RT-21 is a really nice controller - digital readout, computer control options, and so on. You see it used in all sorts of contest stations. We've been really happy with ours. It has a nice "point and shoot" control knob for in-shack use, and integrates nicely with remote station applications like RemoteHams and RemoteRig. 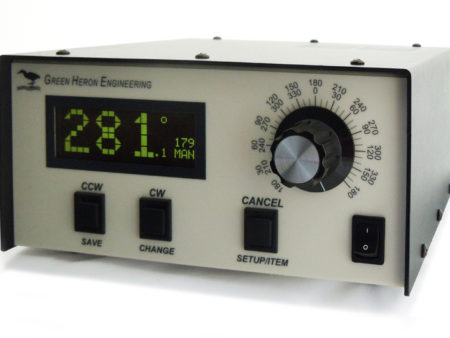 About 6 weeks ago, I noticed that when I attempted to turn the W6VMW antennas remotely using the N1MM Rotor application running on our shack's control PC, it reported an error. I asked on our club's email list if anyone else had noticed a problem. Jay, KD6AMA, dropped by the shack and attempted to dial in a new beam heading on the RT-21, and he observed that when he rotated the heading potentiometer (the big knob on the right), the RT-21 "counted up" for a few seconds, then reported a"No Motion" error.

Our first thoughts were that something had gone wrong with the rotator on the roof. We'd just been through a couple of storms with high winds. Maybe the torque on the antennas had done something bad to the rotator? Had the rotator-to-mast bolts loosened, and were the Yagi and 40m dipole windmilling? Or had the control cable failed? There was a splice in that cable. Although we'd weatherproofed it when we installed the antennas, it was one more possible failure point.

We got access to the roof (we need to get our corporate security to open the doors for us), and when we inspected the rotator and the antenna, nothing seemed too terribly amiss. However, the antenna was pointed due east, and none of us could recall moving it in that direction. The coax lines to the antennas were wrapped around the tower more than normal, although not taught. We were pretty confused.

Then, I remembered that I had in my garage a Yaesu G-800S rotator and control box that I got from an SK estate. The G-800S and G-1000DXA rotators "look the same" to a rotator controller; 24V DC motors and a 10k potentiometer for position readout. We could just swap out parts to isolate the failing subsystem.

The first thing we decided to do was to run the G-1000DXA rotator on the tower from my old Yaesu controller and cable. This might seem a little odd, as it required us to climb the tower. We could have instead swapped out rotator controllers in the shack. So why did we go up on the tower first?

First, understand that the tower on the roof is really short. And if you climb up just a few rungs on the Rohn 25, there's another section of roof you can stand on. You're never more than about 10 feet about the roof. 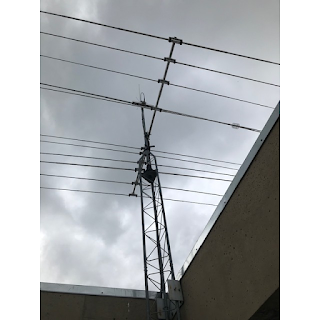 So Patrick, N6PWD, clambered up the tower and plugged in the cable from my controller. I pressed the CW (Clockwise) toggle on the controller, and... the antennas turned! I toggled the CCW (Counterclockwise) toggle and... it turned!

Knowing that the rotator was OK was a big relief. If we'd needed to pay for contractors to pull the rotator out for replacement/repair and reinstall it when finished... that would have blown several years of the club's budget.

Now that the G-1000DXA rotator was no longer under suspicion, that left two possible culprits - the control cable from the shack to the rotator, and the Green Heron RT-21 controller.

I swapped out the RT-21 for my G-800S rotator controller, and everything worked fine. So at this point, we knew the problem was with the RT-21. That didn't really make sense. Lightning is really rare here in Palo Alto, and other types of static discharge events like snow static never happen. We just didn't see any probable cause for the RT-21 to fail

So I dragged my G-800S rotator and cabling back home, along with the RT-21, to put on my workbench.

The RT-21 manual has a section at the end that describes some troubleshooting steps you can follow. The first one has you connect a 10k resistor across the CW/CCW terminals on the back of the controller and measure the voltages while in DEBUG mode and holding the CW and CCW buttons. Those tests both checked out; the controller was providing the expected voltages to the rotator motor.

However, the second test, which checks if the position sensing circuitry on the RT-21 is working, failed for me. For that test, you connect a 10k potentiometer to the GND/POS/REF terminals. Then, if you put the RT-21 in DEBUG mode, you should be able to turn the potentiometer knob and see the heading display on the RT-21 change. For me - no dice, it was stuck at 180 degrees.

I also hooked up my G-800S rotator to the controller, and noticed that the controller would only turn the rotator clockwise. When a counter-clockwise turn was requested, the rotator would move for about a second, then stop. This probably explains how the W6VMW antennas ended up pointed east. They were probably at the limit switch in the clockwise direction.

Then, a thought occurs to me...

Maybe this isn't a hardware problem

I recalled reading in the RT-21 manual that the controller supports a number of different rotators, and some of these rotators have different ways of reporting which direction they think they're pointed. For example, the Orion and Spid rotators report pulses as they move, rather than using a potentiometer to report position as a resistance value. Did our RT-21 somehow get misconfigured for a different rotator type?

I navigated to the menu option where you select that. The option was correctly set to "YAESU DC". Hmmm.

Being the distrustful person I am, I turned the dial to spin through the other options, returned to "YAESU DC", then pressed the "Select" and "Save" buttons. And...

Why did this fix the problem?

I don't know how the RT-21 firmware works, but having worked on some similar projects, I can take a guess.

In whatever Green Heron uses to persistently store the RT-21's configuration (flash memory, most likely), there is a location that contains an integer that represents whether the controller is set for YAESU DC or one of the other types of rotators supported. There is a unique value for each type of rotator. Maybe YAESU DC is represented by the number 0, ORION by the number 1, and so on.

My guess is that the value got corrupted somehow, and didn't contain a value that the controller firmware could recognize. And rather than displaying an error, the firmware just defaulted to the default type of rotator, which happens to be YAESU DC. So the display was maybe lying to me, and the configuration was just invalid.

And then when I re-selected YAESU DC in the menu and chose "Save", that replaced the corrupted value with the correct one, and the controller started working.

This is just a complete wild-ass guess, but...

If you have a Green Heron RT-21 controller, and it's acting weird, go through all the configuration options, re-select the correct value, and save the configuration. It might fix the problem.

After posting a link to this blog post on the Northern California Contest Club mail reflector, I got a response that described a similar problem and fix for the RT-21. So, if there's a problem, try re-saving the controller configuration. It may save you a trip up the tower.

9A and E70 ops have great ears

It's 2100 local time on 40 meters, and I just had zero-fill-request contacts with E70T (Bosnia/Herzegovina) and 9A9R (Croatia) during the CQWW CW contest.

I'm running 500w into a  dipole. These operators are really, really, good!
Posted by Gordon Good at 9:05 PM No comments:

But, out of all the logs in the CW-only, high power division submitted from the Santa Clara Valley section, I was on top! 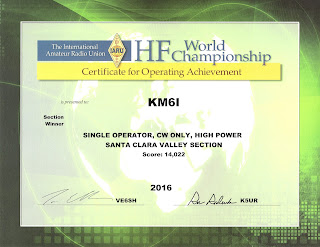 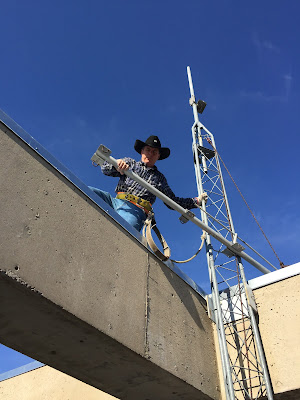 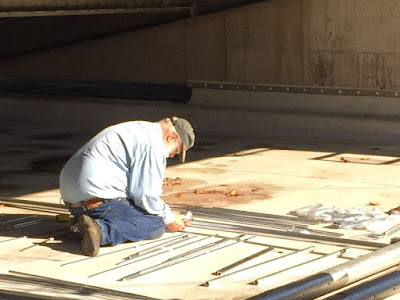 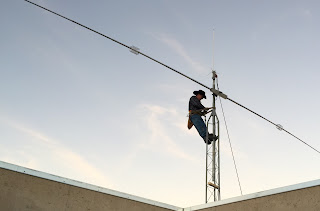 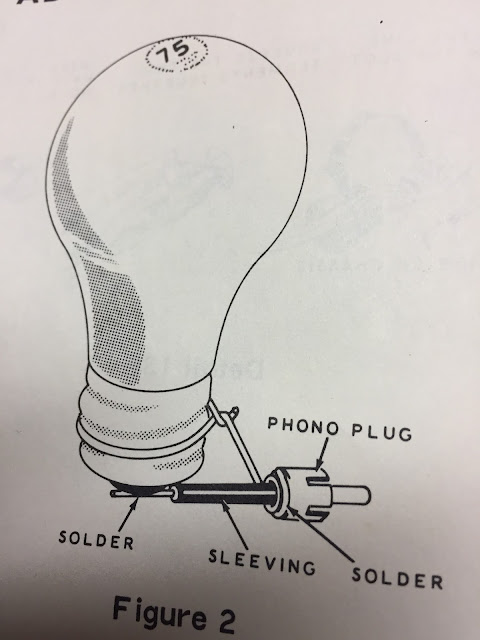 The suggested dummy load from my DX-60B manual.
Posted by Gordon Good at 11:05 PM No comments:

Yes, I should be working...

...but it's more fun running JAs on 15 meters from some random conference room at work using the W6VMW club station remotely! 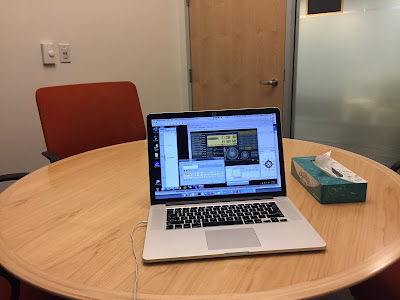 Yes, you can also make QSOs from a Starbucks: 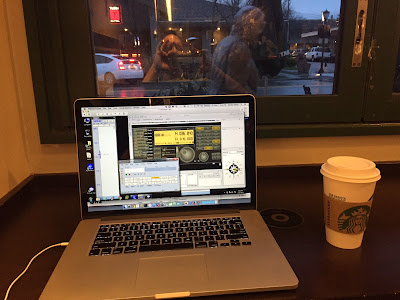 I'll set a goal of 500 QSOs and a clean sweep in this weekend's CW Sweepstakes. I am totally unprepared, other than having gotten N1MM all set up last night. I'll aim to throw up the wire dipole Saturday morning. Right now there are no sunspots, the A Index is 18, and the K Index is 4. Getting the sweep may be hard!

Well, not quite. I did make the sweep, but only 451 QSOs. Motivation was a bit lacking. But for those of you in my log, thanks for the Qs!
Posted by Gordon Good at 6:08 PM No comments: