From now (Sep 27, 2010) until the end of the year, I'll be signing as KM6I/40 as part of the Northern California Contest Club's 40th anniversary event (an award is available!). For more information about the event, see http://nccc.cc/40th.html. To get the award, you need to contact 40 NCCC members.

Note that we won't be using these special callsigns during contests, but the contacts you make with NCCC stations still count toward the award even if they aren't using the /40 suffix. You can determine if any of the contacts you made with during contests are with NCCC members by looking at the list of NCCC member callsigns at http://nccc.cc/40thcalls.html.

I'm betting that if you operate either weekend of November Sweepstakes this year, you'll qualify for the award. 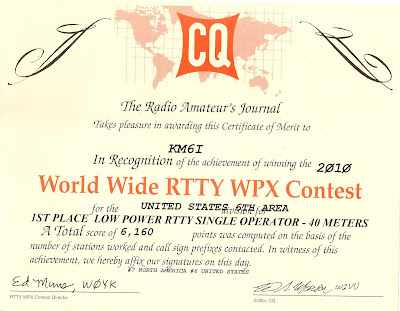