Here are some plots of my existing antennas, as a baseline for comparison. For soil, I used a ground conductivity of 0.005 S/m and a dielectric constant of 13. I don't know if those are correct, but fiddling with them didn't change the gain figures very much.

When comparing these antennas, I'm looking at a their performance at a take-off angle of 30 degrees (shown as 150 degrees on the plots). I don't know if that's the best angle to look at for domestic contests, however.

The first plot is my droopy radial tree-mounted vertical on 7.1 MHz: 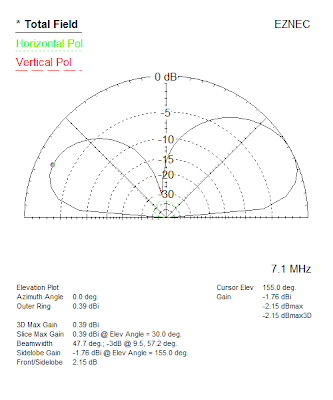 The pattern is asymmetrical because there aren't any radials on the street side of the antenna. Unfortunately this compromises the eastward heading, so at a 30 degree take-off angle to the east, the antenna has a predicted loss of 1.75 dB relative to an isotropic radiator. To the west, EZNEC actually predicts a small amount of gain.

By comparison, a half-wave dipole in free space would be about 3.85 dB better. That's just a little more than half an S-Unit, and there's no way I'll be able to get a 40M dipole up high enough for it to not act like an NVIS antenna.

So I think my verdict on the vertical as a 40M antenna is: win. It bears out the relative success I've had with this antenna. 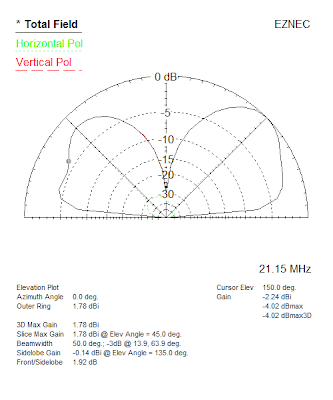 To the east, at a 30 degree takeoff angle, gain is -2.24 dBi. Now, on 15 meters, it's certainly possible to get a dipole up more than a half-wavelength, so the vertical is losing about 4.3 dB relative to an antenna I could easily construct.

In the next post I'll show some ploys of the G5RVjr's modeled performance.
Posted by Gordon Good at 7:51 AM