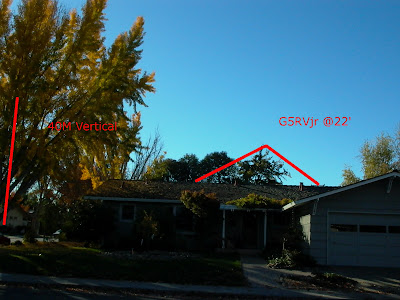 Here's some information about my QTH.

First, here's a photo from the front of the house, looking south. I've drawn some red lines to show where the current antennas are.

At the left (in the Gingko tree) is a 40M 1/4 wave wire vertical. The feed point is in the lowest crotch of the tree, about 5 feet above the ground. At this time, there are 6 radials that run down the trunk and fan out in the front yard. Since the tree is up against the sidewalk, the radial field is not symmetrical, and this does perturb the radiation pattern (I'll include some EZNEC plots in a subsequent post). As I mentioned in a previous post, this antenna seems to work fairly well on 40M and 15M, and I made about 180 contacts using it during the 2008 Sweepstakes.

Above the house is a G5RVjr mounted on a mast attached to the chimney of the house. I recently installed this, and it generally doesn't perform as well as I'd hoped:
So that's what I have today. Next I'll post an overhead drawing of the lot.
Posted by Gordon Good at 3:37 PM