Here are plots for the G5RVjr on 40, 20, 15, and 10 meters. I'm just a beginner with EZNEC, so I may have made some blunders with my assumptions or the calculations.

On 40M, the elevation pattern is what you would expect from an NVIS antenna. The azimuth plot is pretty close to circular, so I didn't bother posting it here.

At the lower takeoff angles, this antenna is about 3.5 dB worse than the vertical. That explains why the vertical was generally better on 40 M. When the band is short, the G5RVjr would have worked better, but I wasn't on 40 when it was short during SS. 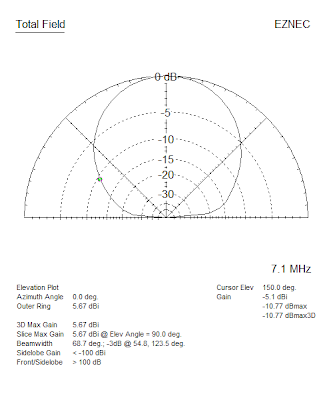 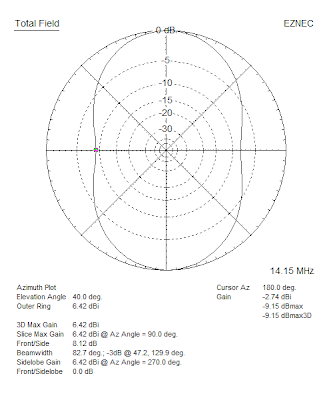 I don't think the antenna is high enough to behave like a free-space dipole, so it's sort of halfway between that and its NVIS regime. Still, there is definitely some directivity, and to the east, it puts out about 9 dB less than it does to the north. Just being able to mount this thing with the legs running N-S would have given me a 1.5 S-unit advantage to the east. Not surprisingly, here are the sections I worked on 20 during the SSB SS:

Definitely easier to the north...

On 15M, the antenna is a little more than 1/2 wavelength in the air: 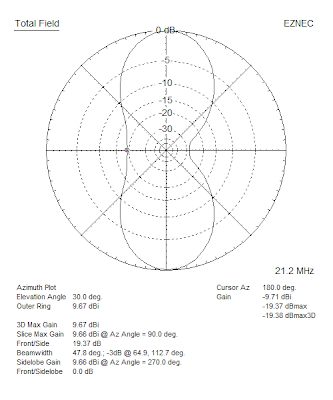 I'm not sure why the azimuth plot is asymmetrical. The antenna wires in EZNEC sure look symmetrical!

Finally, on 10 meters, the predicted azimuth pattern looks like this: 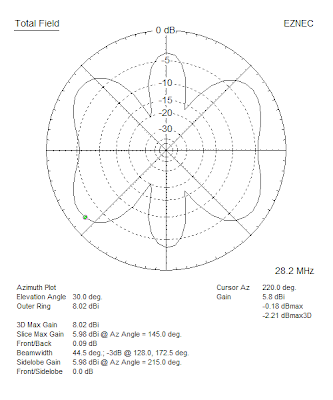 I guess if 10 meters had opened up, I would have had some better luck there, since there are some significant lobes pointing to the NE and SW.

Not having an antenna with major lobes pointing to the east is probably a real hindrance on 20 - 10 meters, and a good way to improve my score would be to install some antennas that, at the very least, don't have their nulls pointed at the part of the country where most of the stations are.
Posted by Gordon Good at 8:22 AM