I finished the prototype vertical and put it up in the back yard. Right now, it's at only about 8 feet above ground. Here's a photo: 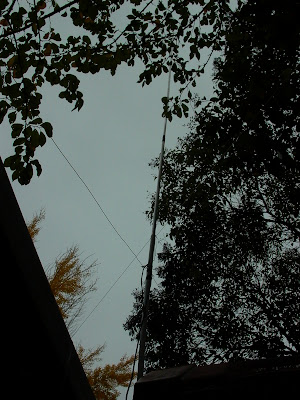 There are two 1/4-wavelength radials that angle down at about 20 degrees from horizontal. So far, the results are about as expected:

In the brief amount of time I've had to tune around the bands, I observed the following: 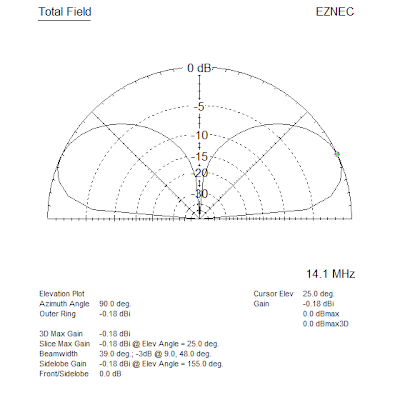 Putting it at 20 feet would improve the gain to 0.28 dBi and lower the takeoff angle to 20 degrees. So I'm probably giving up just a tiny bit of performance due to the lower height, and there's no doubt some interaction with the G5RVjr, but overall, the prototype antenna should compare pretty well with the final design, if I decide to go with it.

Happily, the CQWW DX CW contest starts in a few hours. I'll give the antenna try this weekend.

Total cost for the experiment: $18.00 for the tent poles, $3 for the PVC pipe - all the rest of the things I had laying around.

UPDATE 1559 local time: Made a couple quick QSOs before the contest started - RW0CWA and BA1AN. Guess the thing works after a fashion.
Posted by Gordon Good at 12:51 PM