The CQWW CW contest was this past weekend, and I spent about 7 hours doing search-and-pounce. I ended up with:

The 20M vertical seemed to perform about as well as I could expect. I was surprised at how many times I got a response on my first attempt. I didn't try to wade into the really big pileups (you know, the ones that sound like a symphony orchestra falling down a flight of stairs).

I think these were new countries for me (I am only starting to go back through my QSL cards from the 1970s):

I also learned a lot more about using the N1MM logger, including the variable-speed CW trick (every "<" character you insert into the exchange increases the speed a bit, every ">" decreases it). I didn't use that trick in any of the S&P exchanges, but did program it into my CQ (which I only used a little).

Since I had N1MM figured out pretty well, I was able to multitask and do a cycling workout while doing S&P (hey, when you've got kids, you need to make good use of the free time you have). I only needed to press 7 keys (ctrl-arrows for moving up and down the list of packet spots, up and down arrows to tune, F4 to send my call and F2 for the exchange. I think I made about 35 contacts this way: 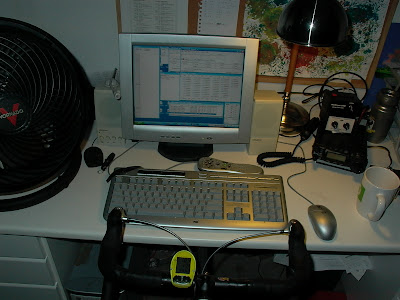 While doing this, I looked down at my bike's power meter (I have a CycleOps PowerTap that can read/record power output at the rear hub), and realized that during my tempo interval, I was generating 225W, and my radio was only putting out 100W. Somehow that seems wrong... 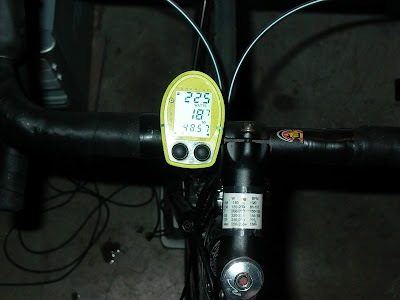